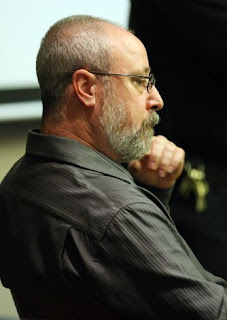 The trial continues and it from the sounds of it its a doozy.

Minutes after listening to the doorknob to her home rattling early one morning four years ago, Kristi Lally heard a more disquieting sound outside her bedroom window, she told jurors Monday as the murder trial resumed for former neighbor Ray Lemes.

“I hear arguing, very loud cursing ... and shortly after that, gunshots,” Lally testified. “I recognized Ray's voice ... It was kind of soft on the other part, but Ray was cursing quite a bit.”

After diving to the floor and calling police, Lally looked out her window to see Lemes behind a brush pile in the street, shirtless and pacing with a pistol in his hand, she said.