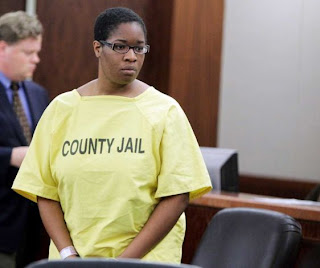 My heart goes out to the families.

What this woman did was inexcusible.

Tears started flowing as soon as Jessica Tata — the subject of a worldwide manhunt after four children died in a fire at her child care facility — walked into a Houston courtroom wearing handcuffs Wednesday.

The tears weren’t from Tata herself, who sat stone-faced as nine criminal charges with multiple counts were read against her, but from relatives of the children entrusted to her care.

Keshia Brown, the mother of 16-month-old Elias Castillo, one of the toddlers killed in the Feb. 24 blaze, began to cry silently as soon as Tata was escorted into the courtroom by sheriff’s deputies to hear the charges against her.