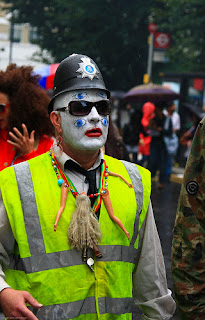 Karma Kop's going to get you.

BOISE, Idaho (AP) — Chalk it up to instant karma. An Idaho man suspected of stealing a wallet from the desk of a prospective employer has been arrested after calling police to report that his wallet was missing.

The Idaho Statesman reports Boise police realized the man who reported the missing wallet matched the description of the suspected wallet thief and arrested 25-year-old Daniel Damico on suspicion of burglary and grand theft.

Police say they believe Damico disposed of the stolen wallet, but used a credit card to buy tobacco at two stores. It was when he was leaving the second store Tuesday that he thought he may have dropped his own wallet.