Well, he didn't shoot himself in the foot 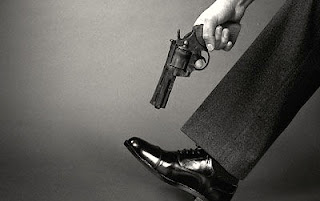 What exactly is a traumatic weapon?

One year for shooting journalist
By Andy Potts - The Moscow News

A businessman has been sentenced to one year in a penal colony after shooting a TV journalist in the foot.

Sergei Virolaynen was found guilty in Moscow on Friday after an incident in a bar when he fired a traumatic weapon at Natalya Arkhiptseva following an argument.

He was also ordered to pay 300,000 roubles in compensation ($10,000), RIA Novosti reported. Arkhiptseva, who works for Russia Today, had asked for 1 million roubles.
Posted by Sam at 8:12 AM