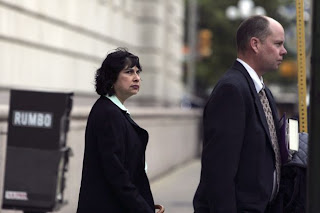 So she not only lost her ticket to practice she is now convicted and is on probation.

A former San Antonio attorney accused of ripping off more than 170 clients who responded to ads promising a cheap fix for traffic tickets was convicted Monday of felony misapplication of fiduciary property.

Under terms of a plea agreement reached in January, Diana Minella has paid back $36,000 in restitution to former clients and was ordered Monday to surrender her law license permanently. In exchange, prosecutors remained silent as state District Judge Mary Roman determined her sentence — eight years of probation.

“If you're going to have a lawyer who's going to rip off clients, we don't need them practicing law anymore,” District Attorney Susan Reed said after the brief sentencing hearing. “Every profession has people who go astray. You just have to be careful who you deal with.”