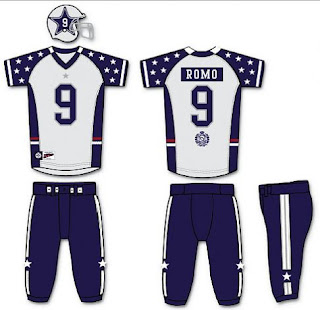 If duds make the dude, then maybe new Dallas Cowboys uniforms could make for a winning team.

In designer Tommy Hilfiger’s eyes that could be a game changer with his imagined uniforms for the Texas team in the current issue of ESPN The Magazine “where he was asked to give his ideas for redesigning some top American sports teams’ uniforms,” said Hilfiger’s menswear spokesman Mark Recker.

America’s team has just finished a lackluster season, so maybe a change of clothes could take them to blockbuster as a stylish squad in re-tweaked stars and royal blue and metallic silver. Talk about fantasy football.