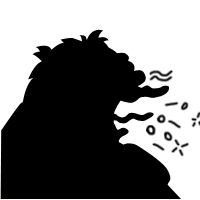 What a lovely family eh?

BLOOMINGTON, Ind., March 10 (UPI) -- Indiana police said a man was arrested for allegedly attacking his mother-in-law while she was a car because she complained about his belching.

Police said the 55-year-old mother of Cunningham's wife told them she was driving at about 10:45 a.m. when she began to argue with the suspect, who was seated in the back seat, about his "sour belch." She said he wanted to get out of the car, but he reached and grabbed her neck before she could pull over.

The woman said she stopped the car while her daughter, who was in the passenger seat, attempted to help her and Cunningham exited the car, opened the driver's door and punched her in the face and chest while threatening to kill her.

Cunningham fled the scene and police were called. Police said the woman complained in her jaw and had red marks on her neck.

Cunningham was charged with battery, intimidation and strangulation. Police said he was also wanted on an outstanding warrant for failure to appear on check deception charges in February.
Posted by Sam at 8:32 AM