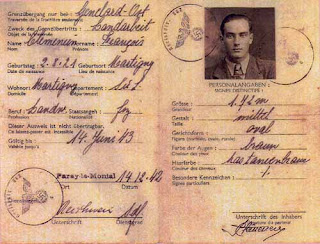 I need to see two forms of ID before I can allow you to make a withdrawal from the bank.

Thank you for your cooperation.


DALLAS (AP) — A hapless bank robber who abided by a Dallas teller's request to provide two forms of identification before she could give him money is going to prison.

Pugh tried to hold up a Dallas Wells Fargo Bank in July. The teller stalled Pugh by telling him she needed to see two forms of ID. Pugh showed her his Wells Fargo debit card and a state ID card. He was captured as he tried to flee with $800.

Pugh pleaded guilty in October to a bank robbery charge. He was already on parole for two aggravated robberies.
Posted by Sam at 1:26 AM