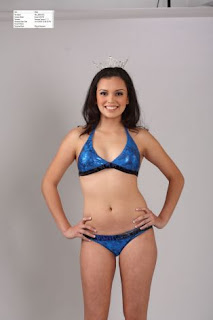 The jury has been deliberating since yesterday mulling over whether the Queen was told she was eating too many tacos or not.  And did she eat too many tacos?

Or whether she was a teen-age diva.

Fate of dethroned Miss San Antonio is in the jury's hands
Calling it a night after a few hours, they'll pick it up this morning.
By Craig Kapitan - Express-News

The jury began deliberating Wednesday evening but failed to reach an immediate verdict in the closely watched civil trial in which ousted beauty queen Domonique Ramirez is seeking to recover her crown.

Jurors discussed the case for about 31/2 hours before notifying state District Judge Barbara Hanson Nellermoe that they wanted to go home. They're set to resume deliberations today at 8 a.m.

Ramirez, 17, filed suit last month after she was notified in an email that her reign as Miss San Antonio 2011 had been revoked by the pageant board of directors. She was later provided with a lengthy list of alleged infractions, including repeated tardiness to events, not writing a thank-you note for a minor gift, gaining weight and insubordination.