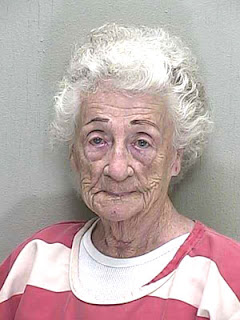 "Hell hath no fury like a woman scorned.  No matter how old she is."

After being denied a kiss yesterday by a neighbor 39 years her junior, a 92-year-old Florida woman allegedly returned to her home, retrieved a .380 semi-automatic handgun, and fired several shots into the man’s residence.

Aged pistolero Helen Staudinger was arrested last night and charged with aggravated assault and firing into an occupied dwelling, according to a Marion County Sheriff’s Office report. Staudinger is pictured in the mug shot at right.


Investigators allege that Staudinger went next door to speak with Dwight Bettner, but her 53-year-old neighbor asked her to leave. In an interview with a sheriff’s deputy, Staudinger said she told Bettner that she would not leave unless he gave her a kiss.