Stupid crime to be involved in 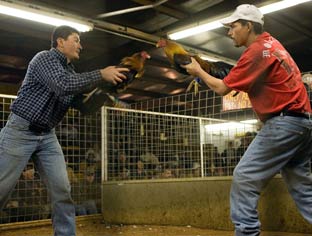 I've never understood the whys and wherefores of this crime.

Why even do this?  Of course might as well ask Michael Vick why he was involved in dog-fighting.

Bexar County Sheriff's Office deputies got a tip that the fights were being held at a secluded, vacant piece of property in the 13600 block of Quesenberry Road off Somerset Road, said Sgt. Charles Campbell.

Officials raided the property about 6 p.m. and found the ring and 50 to 60 people betting on the fights.