I want some too 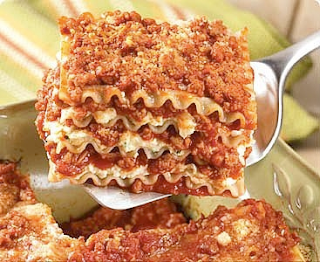 
ROME (AP) — He avoided Italian police for a decade on the run, but couldn't resist his wife's lasagna.
Police say Giancarlo Sabatini went into hiding in 2000, shortly after being given a 3-year, 8-month prison sentence in a cocaine trafficking case.

Acting on a tip, police staked out the homes of Sabatini's wife and daughter Tuesday in Rocca Priora, a town near Rome. When they spied the daughter leaving her mother's house and furtively dashing toward her home bearing a tray of lasagna, police, suspecting a secret guest, burst in and arrested Sabatini.

Many Italians prepare lasagna with meat sauce for lunch on the last Tuesday of Carnival. Police say Sabatini came from his hideout in Belgium to celebrate the last day before Lent with his family.