Death at the local car wash 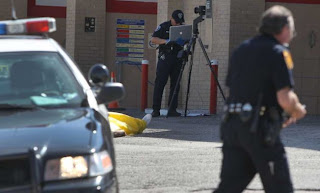 A firefight apparently broke out at the car wash.

The news this morning described the police as finding cartridges from both rifles and pistols.

Shooting claims two at East Side car wash
Another man is wounded, and suspects flee.
By Eva Ruth Moravec - Express-News

Two men were killed and one was injured in a shootout at an East Side car wash Sunday afternoon, San Antonio police said.

Officials said two groups of men got into a fight at a car wash on Spriggsdale Avenue near East Commerce Street around 1 p.m. Sunday, said Sgt. Daniel Scott. Several people at the car wash witnessed the shooting, police said.

Police weren't sure what caused the disturbance. The fight escalated, Scott said, and the men pulled out two guns.