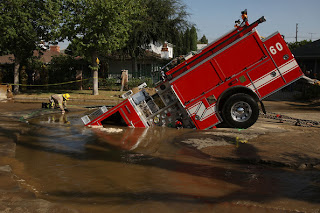 Drunk driving in a fire truck!

HAMILTON, Va. (AP) - Authorities in Virginia say a volunteer firefighter is accused of taking a fire truck on a drunken joyride and nearly smashing into a deputy's patrol car.

The release says a deputy had to veer into a ditch to avoid hitting the truck.