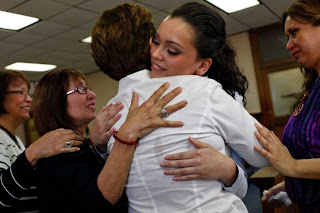 Well, after a day and a half of deliberations the deposed Queen is the Queen again.

I think she may have won the battle but ultimately, she will have lost the war.

Who will want to hire a difficult, litigious 17 year old diva?

Ousted beauty queen Domonique Ramirez retrieved her title and crown Thursday under a national media spotlight after a lawsuit jury unanimously decided the pageant organization that fired her had breached her contract.

“I don't have any choice but to reinstate Miss Ramirez as Miss San Antonio 2011,” state District Judge Barbara Hanson Nellermoe told the parties after shaking each departing juror's hand.

Family and friends of Ramirez, 17, broke into applause, and her attorney, Luis Vera Jr., appeared to wipe away a tear.