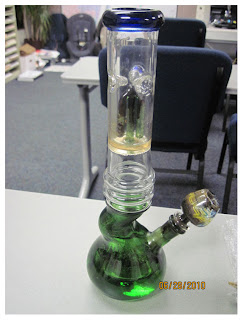 From The Smoking Gun

Grapevine--The parents of a 13-month-old Texas boy are facing felony endangerment charges after the child's father allegedly put a marijuana bong on the toddler's lips.

The bong, pictured above, was seized by cops Monday night after they received a tip that Julio Garcia was smoking marijuana in the Grapevine apartment he shares with Brenda Duran, the boy's 19-year-old mother.

A witness told cops that after Garcia--who turned 20 Monday--took several hits from the bong, he placed his son's mouth on the glass device (Garcia also allegedly let the child play with a bowl of pot). Garcia was charged with child endangerment and marijuana possession, according to a Grapevine Police Department report.

Duran was hit with an endangerment rap since she was present in the bedroom where her child handled the bong. The boy was placed in the custody of relatives following the arrest of his parents.
Posted by Sam at 5:37 PM