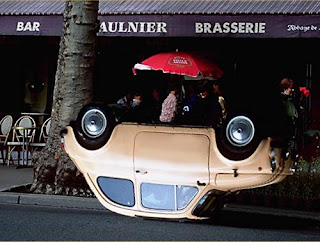 He must've been going pretty fast to flip his car over.

And who in the heck was he texting at 3:30 in the morning??  I'm sure it was quite important.

Any one want to bet alcohol also played a part in this?

A man who crashed into a parked car told San Antonio police he was texting while driving on the North Side early Sunday morning.

Nathan Edward Ellis, 22, was driving a black Ford Mustang east in the 300 block of Linda Drive around 3:30 a.m. Sunday, when he struck a parked Honda Accord, according to a police department incident report.

The Mustang rolled over, landing on top of the Honda, police said.