Sexual assault of a child 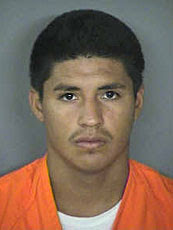 Well, now that he's 17 he's not subject to juvenile prosecution but rather, he'll be tried in the adult system.

My prediction is things will be hard for him having previously committed a sex-crime against a 4 year old.  Well the article only said he stated he had previously been arrested for the sex crime.

A man accused of crawling through a bedroom window and sexually assaulting a 12-year-old girl was arrested Monday, authorities said.

Richard Ramirez, 17, is being held in Bexar County Jail on one count of aggravated sexual assault in connection with the incident, which took place Saturday. A judge set bail at $50,000.

San Antonio police believe Ramirez snuck into the window of a bedroom and sexually assaulted her on top of a mattress. An arrest warrant affidavit states a witness saw the incident, and both the victim and Ramirez were medically examined.