Soon, the end of the story 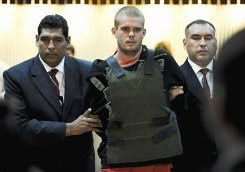 I am sorry for Natalee's parents and her family that it has come to this.

At least, hopefully soon, they will be able to recover her remains and give her a proper burial.

Dutchman to reveal info on missing US teen
Breitbart.com

A Dutchman charged with the murder of a Peruvian woman will tell police where to find the body of a US teen who disappeared in Aruba in 2005, a senior Peruvian police investigator said Friday.

General Cesar Guardia, who is leading the investigation into Joran Van der Sloot's role in the murder of the Peruvian woman, said the Dutch citizen had let slip that he knew the whereabouts of 18-year-old American Natalee Holloway.

But Van der Sloot told Peruvian police that he would only "talk about the matter with Aruban authorities," Guardia told AFP.