One boy for sale 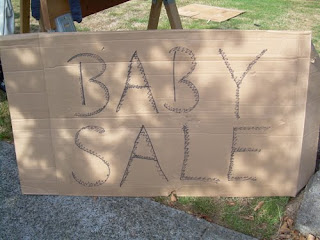 $25 bucks?  That's pretty cheap, it doesn't even begin to cover the production and delivery costs.  But if you sell in bulk quantities I guess you can take a loss leader on babies to get folks into the store.

Couple Tried to Sell Baby Outside Walmart for $25: Cops
By JESSICA GREENE -  NBCbayarea.com

Everyone knows you can find just about anything you need for a low price at Walmart -- including baby stuff. But an actual baby? That's not usually part of the deal.
Unless you're desperate for cash and not in the best frame of mind.
That's the case in Salinas, California, where police say a couple tried to sell their 6-month-old baby for $25 outside the doors of a Walmart store. Now they're facing child endangerment charges.

Patrick Fousek, 38, and Samantha Tomasini, 20, were arrested Wednesday, hours after Fousek allegedly approached two women outside Walmart and asked if they'd like to purchase his child -- at the bargain price of $25. The women initially thought Fousek was joking, but when he became persistent, they got suspicious and reported it to police, Salinas police spokesman Officer Lalo Villegas said.
The rest of the story: