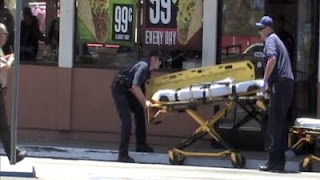 Yesterday's posting was an initial posting.

This report updates that and has more information.  Apparently the shooter was the stepfather of the woman he shot.  he killed her husband, one of her children, wounded her and another of her children and killed himself.

LOS ANGELES (AP) – A gunman attacked his stepdaughter's family as they ate lunch at a California restaurant, killing her husband and 6-year-old son, wounding the woman and another child, and then fatally shooting himself.

Jimmy Schlager, 56, arrived at the Del Taco restaurant in San Bernardino on a bike at about 1 p.m. Saturday, walked over to a table and fired several shots at his 29-year-old stepdaughter, her 33-year-old husband, and their sons, ages 5 and 6, San Bernardino police Lt. Jarrod Burguan said.

"There was a very brief exchange of words, then he opened fire on them at near point-blank range," Burguan said.

The woman's husband was declared dead at the restaurant and the 6-year-old died at a hospital, San Bernardino Fire Department spokesman Steve Tracey said.

The woman and the 5-year-old boy were in critical condition at Loma Linda University Medical Center, Tracey said. The names of the victims were not released.

The woman's mother who was married to Schlager died several years ago, and investigators were trying to determine how well Schlager and his stepdaughter got along as police sought a motive for the shooting, Burguan said.

Police said between five and seven employees and several other customers were in the fast food restaurant, but the gunman clearly walked in seeking the four victims and no one else was injured.

Bullet holes marked the walls and glass covered the floor.

Owners of nearby businesses said horrified patrons streamed out of the restaurant after the shots were fired.

Schlager, who is from Lancaster in northern Los Angeles County, had an extensive criminal record dating back to 1972 that included assault with a deadly weapon and a restraining order taken out by a co-worker.

Despite living an hour's drive away, Schlager had many ties to San Bernardino and once lived just a few blocks from the restaurant, Burguan said.

Burguan said the attack on the family was one of the worst crime scenes he could remember in San Bernardino, a city of about 200,000 people some 60 miles east of Los Angeles.