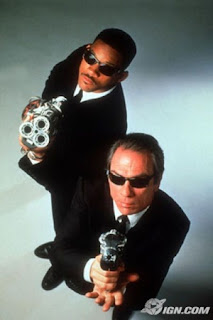 She's lucky he didn't pull out the little forget me pen and erased her memory.

BTW I guess don't wear black in the heat it will arouse suspicion.

Now I am not making fun of the girl it is just the way it reads in the news article.

Police Reports for June
The Herald-Zeitung

• A New Braunfels man reported his daughter was pulled over by someone she believes was impersonating a NBPD officer at about 8 a.m., May 25 on I-35 near Taco Cabana.

The man told officers this week that his daughter suspected something when a tall, thin man with a black jacket and black cowboy hat in a white squad car with few markings but red and blue lights under the grill and a police bumper pulled her over.

The man was wearing black despite the heat, which triggered her suspicion according to police reports and then man, who did not introduce himself, asked for her driver’s license but did not seem official, according to the report.

The woman then drove off, leaving her license.

The man did not follow her, which eventually prompted the family to file a report with police.

No arrests have been made and officers have not encountered the man described.