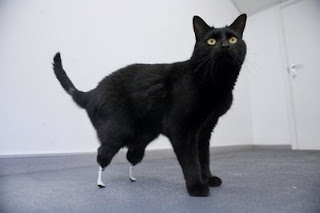 Wow, cool stuff they can do medically.

They can build him better.

LONDON (AFP) – A cat which lost both back paws after a traumatic accident involving a combine harvester has regained a spring in its step after being fitted with prosthetic limbs.

In a groundbreaking surgery carried out by Noel Fitzpatrick, a Surrey-based veterinary surgeon, the custom-made implants "peg" the ankle to Oscar's foot and mimic the way in which deer antler bone grows through skin.