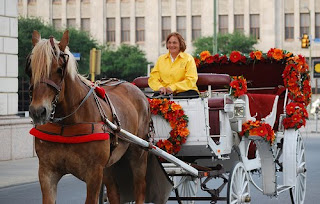 Only explanation I can think of.  Were the motorcyclists acting like jackasses on purpose?

Was the driver of the carriage acting in self-defense?  Why did he start fighting with them?

A horse carriage driver was arrested on suspicion of cutting another man downtown Friday night.

Richard Yanas, 46, is charged with aggravated assault with a deadly weapon. He was booked into the Bexar County Jail on Saturday, and a magistrate judge set his bail at $50,000.

The incident occurred just after 11 p.m., when Yanas and two men on motorcycles were at East Martin and Navarro streets, according to a San Antonio Police Department report.