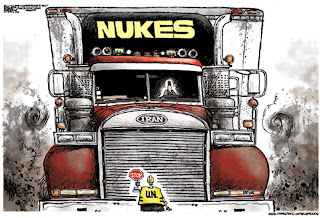 I, for one, am very glad we are on top of this situation.  Now we know how much weapons-grade uranium Iran has.

You know, just in case their accounting system fails and they lose a few A-bombs over Israel or here and they don't know how much uranium they have left to restock their inventory.

Panetta also says he is doubtful that recent U.N. penalties will put an end to Iran's nuclear ambitions.

He says the penalties could help to weaken Tehran's government by creating serious economic problems. But he adds, "Will it deter them from their ambitions with regards to nuclear capability? Probably not."