One for the road 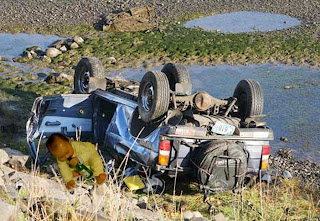 Maybe he was upset he had just flipped his truck and so, he needed a drink?

He needs to be off the road until he stops drinking period.

AUCKLAND (Reuters) - A drunk driver trapped after overturning his car cracked open another can of beer while he waited for emergency crews to rescue him, a New Zealand court was told.

Paul Nigel Sneddon, 47, pleaded guilty to careless driving and drunken driving after being nearly three times over the legal alcohol limit in a district court in the city of Palmerston North, the Dominion Post newspaper reported on Wednesday.

Police found Sneddon, a former baker, trapped in his overturned Ford Laser on June 1, drinking a can of beer after he failed to take a corner properly and crashed through a wooden barrier, flipping his vehicle.

Defense lawyer Peter Young said that when Sneddon found he could not open the doors, "he had nothing else to do at that point, so he had another beer."

When asked by police how much he had consumed, Sneddon replied: "Plenty, I've been drinking for four days straight."

Sneddon, who is estranged from his wife, told the Wellington- based newspaper that he went on a drinking binge after losing his job at a bakery on the same day that he heard his father was diagnosed with prostate cancer.