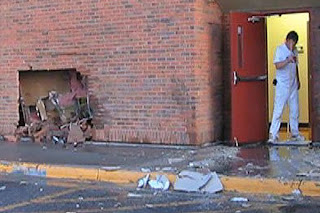 Ten years probation for this Intoxication Assault where three students were injured when he crashed into the school building.

One of those injured was his own son.


A San Antonio man was ordered Friday to spend six months in jail for the October 2007 drunken driving wreck in which he drove his van through the wall of a South San High School athletic building, injuring three students.


Rolando Lopez pleaded no contest to intoxication assault in May for the injuries, which included broken bones.

One of the victims was his 15-year-old son, who he was picking up from school, court documents state.
State District Judge Maria Teresa Herr ordered the jail time as a condition of felony probation, which Lopez will serve for 10 years.