How do you spell relief? 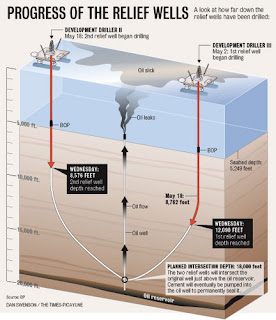 It can't happen soon enough and I sure hope the plan works.

If it doesn't, as I said several weeks ago, its time to blow the well.

HOUSTON — BP's progress drilling a relief well may put it within striking range of the blown out Macondo well in as little as two weeks, independent analysts said Tuesday, stoking hopes that the devastating gulf oil spill could be stopped nearly a month earlier than anticipated.

While BP has not adjusted its early August timetable for completing the first of two relief wells boring toward the Macondo more than two miles beneath the Gulf of Mexico seabed, independent drilling engineers and some energy analysts said the company could be in a position to intercept the damaged well and begin the critical kill operation within 14 days.

“Two weeks might be reasonable,” said Darryl Bourgoyne, director of the petroleum engineering research and technology transfer laboratory at Louisiana State University, though he added the company still has many steps to complete first.