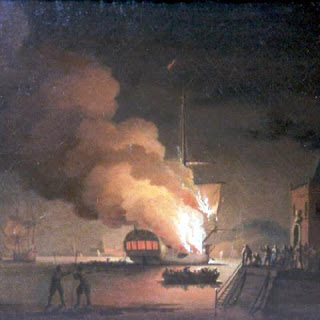 Can anything else go wrong?

BP Plc said it temporarily stopped collecting oil from its leaking well off Louisiana after a fire aboard the collecting vessel, allowing petroleum to again spill unhindered into the Gulf of Mexico.


There was no damage as a result of the fire, which was put out “within a few minutes,” said Robert Wine, a BP spokesman. Oil recovery was shut down as a precaution at about 10:30 a.m. New York time and is expected to resume today after equipment inspection and safety checks, Wine said.

The fire atop the derrick of the drillship Discoverer Enterprise may have been caused by lightning,

London-based BP said today in an e-mailed statement. The company said there were no injuries. The National Weather Service had forecast isolated thunderstorms in the area.

“It’s just going to be an interruption,” said Bruce Lanni, a portfolio strategist at Nollenberger Capital Partners Inc. in San Francisco, which manages $1.2 billion. Lanni said he and the company own BP shares. “They are going to obviously adhere to all of the inspections to make sure that they don’t get caught up in an issue on this one, too.”

The drillship had been collecting about 15,000 barrels a day from the well for the past week, and today’s recovery rate will fall an undetermined amount as a result of the shutdown, Wine said. The drillship is capturing oil from a well that began leaking after an April 20 explosion and fire aboard the Deepwater Horizon drilling rig in the Gulf.

“If that is not bad luck, I don’t know what is,” Fadel Gheit, an analyst with Oppenheimer & Co. in New York, said of the lightning strike. Gheit rates the shares as outperform.

The fire today occurred as crew prepared to begin collecting oil and gas aboard a second vessel, a step aimed at reducing the amount of oil spilling into the Gulf. The rig has been customized to burn all the oil and gas it gathers.

Operations may begin today on the floating rig Q4000, expected to increase the oil-capture capacity more than 50 percent to 28,000 barrels a day, Wine said. The rig wasn’t collecting oil when the Discoverer Enterprise stopped, he said.

A government panel estimated the well was leaking 20,000 barrels to 40,000 barrels a day before the company cut off a kinked pipe on June 3, potentially increasing the flow rate.

The U.S. Coast Guard asked BP to arrange sufficient collection equipment to capture all the oil, and provide back-up systems in the event of a breakdown. The company submitted a plan on June 13 saying it aims to collect as much as 53,000 barrels a day by June 30 and 80,000 barrels a day in mid-July.
Posted by Sam at 7:03 AM