Was the Mom high? Does it even matter? 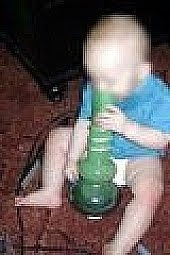 I would certainly hope the mother is under investigation.

Maybe she needs to sell the baby at Wal-Mart.

A SHOCKING picture of an 11-month-old baby apparently smoking a BONG has sparked fury after being posted on the web.

The tot is seen sitting on the floor wearing a nappy and putting his mouth to the smoking pipe as if he were using it to inhale marijuana. The baby's unnamed mother, of Jacksonville, Florida, has provoked outrage on online forums.

But she has strenuously denied that she would ever let her child take drugs.

She wrote on Facebook: "I would never ever ever let him get high."

Child protection agencies in Florida said they are investigating the case.
Posted by Sam at 8:55 AM