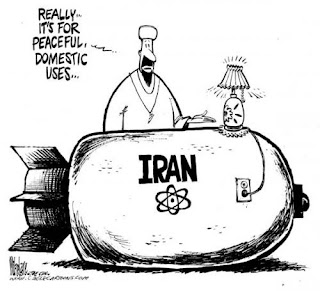 But "Everyone" is trying to ignore the elephant in the room.

This is appeasement or a willful disregard for the truth.  If allowed to continue the blood of millions of deaths will be on our hands.

Oh and by the way, Iran has just announced it is sending ships to run the Gaza Blockade.

WASHINGTON - Due to concern over potentially harmful international political implications, U.S. officials will only say they "believe" Iran is engaged in a clandestine program that may yield a nuclear weapon.

However, the men and women working undercover to stop Iran from doing so are willing to say much more.

"There is no doubt Iran is definitely building a nuclear weapon," a senior foreign counterproliferation official with a U.S. ally says in an exclusive interview with WTOP.