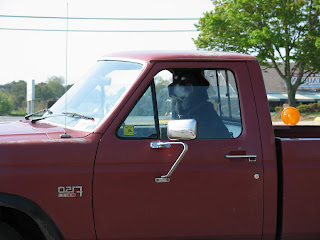 Personally I think he waited so long to call for help and go to the hospital because he was embarrased to tell then how he got injured.

Or he didn't want to get his dog in trouble.

RIDGE MANOR, Fla. (AP) -- A man was reportedly run over by his own truck after his dog put it into gear. The sheriff's office reported that 43-year-old Christopher Bishop was checking under his Ford F-150 for oil leaks Sunday evening. He had put the running truck into neutral and left the driver's door open. While he was under the truck, Bishop's bulldog, Tassey, jumped into the truck and knocked the vehicle into gear. The truck rolled over the left side of Bishop's body.
Bishop managed to get up, stop the vehicle and go into his house. After several hours of pain, Bishop finally called for help.
He was taken to a nearby hospital with injuries that were not considered life-threatening.
Posted by Sam at 7:14 AM