That's a whole bunch of moolah! 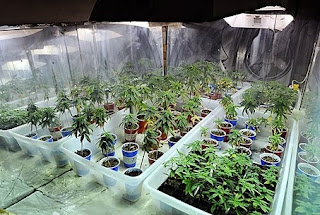 No wonder we'll never stop folks from doing this stuff.

The San Antonio Police Department recovered a massive stash of marijuana plants Friday morning at a house in the city's Northeast Side.

Police said a tip led them to a home in the 4200 block of Briarcrest Street, where they netted 250 plants valued at an estimated $1 million.

Police took at least one unidentified man into custody, according to SAPD spokeswoman Sandy Gutierrez. She said the man faces federal drug charges and an investigation into the drug bust continues.
Posted by Sam at 7:38 AM