Liquor is quicker....to cause a rollover accident 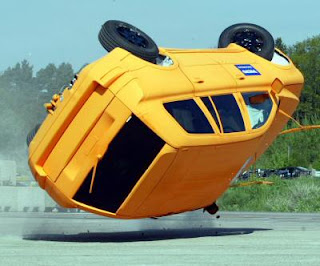 This epidemic of drunken driving has really got to get curtailed.

Here's someone driving at 6 p.m. in the afternoon, clear daylight, clipping the rear-end of another car causing it to go out of control and roll over several times.

The folks are in the hospital condition unknown at this time.  Him?  He's probably okay with maybe a hangover.

All right that may be a rush to judgment he was only allegedly drunk when the accident ocurred.  I'm sure a blood draw was done.

Charges pending in I-35 accident
By Michelle Mondo - Express-News

A man who was allegedly drunk when he caused a three-car crash that injured two people Sunday evening could face charges of intoxication assault, officials said.

The crash occurred just after 6 p.m. in the northbound lanes of Interstate 35 near the Southcross exit.

Witnesses told police they saw a black car driven at a high speed clip the back of another car, causing both drivers to lose control.