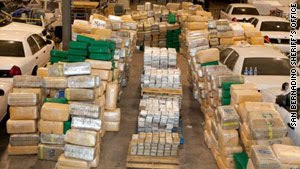 That's weeding out the weed and the rest of the narcotics spectrum.

The problem is there's probably at least 10 more that get through for every one stopped.


(CNN) -- Authorities in southern California said the strong smell of marijuana helped them discover $45 million worth of drugs in the back of a tractor-trailer they had pulled over for a traffic violation.

Deputies stopped the truck Wednesday morning, then opened the trailer after finding problems with the paperwork for the load, the San Bernardino County Sheriff's Office said Friday.

An "overwhelming odor" led investigators to about 20 tons of narcotics stashed in pallets in the back of the truck, including about 38,000 pounds of marijuana, 2,700 pounds of cocaine and 67 pounds of methamphetamine, the sheriff's office said in a statement.

Sheriff Rod Hoops said Friday night the seizure was one of the largest in the county's history.

The truck's driver, Fernando Luevano, 32, was arrested and charged with possession, transportation and sale of narcotics, authorities said.
Posted by Sam at 12:09 PM