A pizza with everything 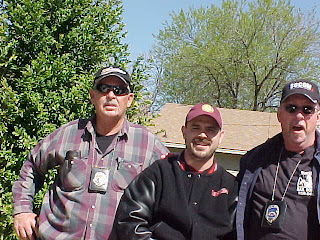 This frightening home invasion attempt was thwarted by a brave woman.

There is no telling what the outcome would have been otherwise.

Perhaps we will have to have an ordinance that pizza guys wear ID's?  Like these guys?

San Antonio police are looking for two men who posed as pizza deliverymen and forced their way inside a far Northeast Side home in an attempted robbery Monday afternoon.

Peggy Wolford, 49, answered the door to the home in the 14900 block of Burning Creek around 1:20 p.m., according to a police department incident report. The men, described as being in their 20s and wearing black shirts, asked her if she ordered two pizzas, and tried to hand her two Pizza Hut pepperoni pies, according to Sgt. Daniel Alonzo.

“She said no, and they pushed their way inside,” he said. “She pushed back, and continuously resisted.”