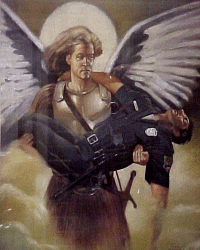 One police officer killed and two other men dead, one of whom is the son of the Dallas Chief of Police.

The Police officer was the father of two.  May he rest in peace.


LANCASTER, Texas (AP) -- A police officer and two other men, including the son of Dallas' police chief, were killed in shootings at a suburban Dallas apartment complex, authorities said.
The officer was responding to a reported domestic disturbance around 6 p.m. at the apartment complex in Lancaster, just south of Dallas, when the call was upgraded to shots fired, police spokesman Sgt. Derek Clark said. When the officer arrived, an exchange of gunfire erupted and the officer was killed.
His name hasn't been released, but Lancaster Police Chief Keith Humphrey said late Sunday that he was a 37-year-old father of two and a five-year police veteran.
The rest of the story:
Posted by Sam at 7:16 AM