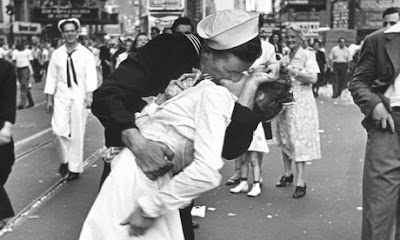 On a sad note.

The woman who is the nurse in this iconic photograph taken on V-J Day in Times Square in 1945 just passed away at the age of 91.

The sailor has never been identified.


Nurse being kissed in iconic wartime picture dies, aged 91
Edith Shain was photographed by Alfred Eisenstaedt in Times Square in 1945 being kissed by a sailor
guardian.co.uk


A nurse who was photographed being kissed in Times Square in New York to celebrate the end of the second world war in 1945 has died, aged 91.

The iconic VJ Day picture of Edith Shain by Alfred Eisenstaedt was published in Life magazine.

The identity of the nurse in the photograph was not known until the late 1970s when Shain wrote to Eisenstaedt to say that she was the woman in the picture. It was taken on 14 August 1945 when she had been working at Doctor's Hospital in New York.

The identity of the sailor who kissed her remains unresolved.

The photograph made its mark on Shain's life, as her subsequent celebrity led to invitations to war-related events such a wreath layings, parades and other memorial ceremonies.

Her son Justin Decker said in a statement: "My mom was always willing take on new challenges, and caring for the World War 2 veterans energised her to take another chance to make a difference."

Shain, who died at her home in Los Angeles on Sunday, leaves three sons, six grandchildren and eight great-grandchildren.
Posted by Sam at 1:54 PM