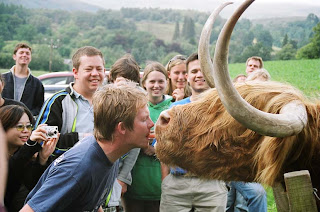 Well this story has an even more bizarre ending apparently.

More bizarre than I ever would have imagined.

Man forced to marry cow faints at wedding
A teenager collapsed during his marriage to a cow he had earlier been caught having sex with after claiming it had flirted with him.
Metro.co.uk

Unemployed Ngurah Alit, 18, was seen in a Bali paddy field standing naked behind the animal.

He claimed he believed the cow was a young and beautiful woman, and it had seduced him with flattering compliments.

He was then forced to marry the cow to cleanse the coastal village of Yeh Embang of the bestiality.

But during the ritual Alit passed out as locals and police – drafted in to keep journalists at bay – looked on and his mother began screaming, according to Detik.com.

Alit quickly then became a widower when his new bride was drowned in the sea as part of the Pecaruan ritual. Alit was only symbolically drowned and bathed on the beach.

Chief Ida Bagus Legawa declared that the village had then been ‘cleansed’ from the ‘defilement from the incident.’
Posted by Sam at 6:20 PM