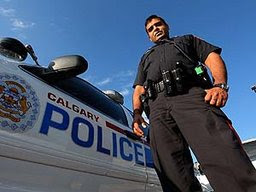 How do you say Oh Shit! in French?

Google translates it as Oh Merde!

Anyway you say it it still is oops.

CALGARY -- It had all the makings of a perfect crime.

The culprits hid their valuables, from jewelry to electronics, smashed windows and even made faux bad-guy footprints before calling police.

Unfortunately, for those who hoped to foil authorities, Const. Charanjit Meharu was among those to arrive at the alleged break-and-enter scene.

When the purported victim, who was hysterical and saying she had lost everything and had a list of what was missing for cops, took a call from her father in Quebec telling him what happened in French, the carefully crafted ploy unraveled.

“She was telling him she and her boyfriend made up the story to make an insurance claim,” Meharu says.


“She didn’t expect a brown guy to speak French.”

That woman was charged with mischief.

French is just one of seven languages the 37-year-old constable speaks — along with English, Punjabi, Hindi, Urdu, Arabic and Gujarati.

The full-time police officer and family man says he would like to learn more, starting with Chinese dialects, but he doesn’t have time.

“I’m so busy with the languages I already know,” he says.

About four years ago, Meharu was in Montreal working a high-paying private sector post when he opted to join Calgary police.

He is also a resource the force can’t put a price-tag on with Meharu’s translation services in high demand city-wide when he’s on-duty and off.

“I don’t go by the clock, if somebody needs help I will help — I enjoy it,” he says.

“So far, I haven’t said ‘no.’ Sometimes, I hardly reach home and I come back.”

Even before Meharu was on the streets, word spread about the man of many languages.

Officers were asking him to translate witness statements, listen to audio tapes, be a middleman in interviews and literally becoming bona fide Rosetta Stone for colleagues at a call.

The first time his language abilities were called upon on the streets wasn’t even his call to take, but a heated dispute he helped responding officers make sense of.

“The landlord spoke Urdu and the tenant was speaking Arabic,” he recalls.

His partner, Const. Mike Brown, chuckles at the memory — just one of many calls where Meharu put his unique skills to work.

“I’ve seen it all, sometimes three languages in one call,” says Brown who speaks 11/2 languages himself — English and some French.

“Upstairs and downstairs are speaking different languages and he is still relaying it all back to me in English.

“He can get to the bottom of a number of problems others can’t.”

And as for the two, sometimes their communication transcends language.

“We can understand each other just by looking at each other,” Brown says.

India-born Meharu’s passion and aptitude for language began at a young age.

Some could say it’s in his genes — his father earned five master’s degrees, including one from Oxford University and speaks several languages, too.

Meharu, whose mother tongue is Punjabi, learned Hindi, his country’s national language as a youngster.

Later, he began learning English when his father read him Shakespeare and he could write in three languages by age 15.

He added Urdu to his list so he could understand East Indian movies filmed in the language — and when he went to university to pursue his master’s degree in commerce and administration learned Gujarati so he could converse with fellow students.

He moved to Canada in 1995 where he began to learn French and struggled for nine months to get a job of any sort.

Turned down by “about 600” potential employers claiming he was overqualified, Meharu, was offered a one-time, two-hour cleaning job.

That led to a 10-year career in the private sector, but left the man who spent his pocket money as a child helping the less fortunate yearning for more meaningful work.

“In the private sector it was all money and who you can step over to make money,” he says.
“I wanted to help people.”

Now, he is a go-to-guy for many in the community looking for a cop who can literally speak their language in addition to being busy with calls from colleagues.

“This is my passion, to help people and without language you can’t communicate,” he says.

“I don’t have what other police officers have, but I use what I have.”

And in only a few years on the job, it’s given him a crash-course across the whole gamut of policing, with Meharu helping on files from drugs to robbery, sex assaults and homicides — at times even translating to break-down communication barriers to hear what an accused has to say.

One of his most rewarding saw the end of 16 years of abuse for a married woman who had reached out unsuccessfully in he past, help stymied by a communication breakdown.

“Every time she would call police, she couldn’t explain well the situation,” Meharu says, adding her husband was later convicted of abuse.

“Now she is living her life … I’m doing what I came here for.”

Recruiting Sgt. Denise Seher said ultimately the force looks for honest men and women who are fair and show courage in the face of adversity, at the same time meeting the basic qualifications.

But in a city this diverse — with a police force which “tries its best to represent the community it serves” — people such as Meharu are an asset, she says.

“The benefit of having folks who speak many languages is fantastic,” she says.

“Communication is vital, it’s our very first line of defence.”
Posted by Sam at 7:45 AM