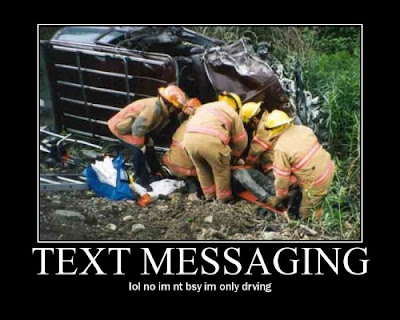 This is why you almost seem to get into an accident everyday lately.

I look and see as I drive 30+ miles each day folks just chatting away on their phones or even texting!

While we are on the highway to boot!


Nothing to LOL about
Study: Adults as guilty as teens in texting while driving


SAN FRANCISCO — If you're about to warn your teenager about the dangers of texting or talking on the phone while driving, a new report suggests you look in the mirror first.

A study released Friday by The Pew Research Center's Internet & American Life Project says adults and teenagers are equally likely to have texted while driving. And adults are more likely to have chatted on their phones while driving. The study found that 47 percent of adults who text reported sending or reading texts while behind the wheel.

Mary Madden, a senior research specialist for Pew and the study's lead author, said that while many educational efforts that emphasize the dangers of distracted driving have targeted teens, the findings show a need to educate adults, too. "I think all of us can identify with that temptation to stay connected during those idle moments in the car. ... The reality is, even if the car isn't moving, a delayed response to a green light or at a stop sign can still result in an accident," she said.

The Pew study didn't take into account that some drivers may be using hands-free devices such as Bluetooth headsets when they talk and drive, but Madden pointed out that simply having a conversation can be a distraction.

Even when not driving, adults are still engrossed in their phones: The study said that 17 percent of adults who have cell phones reported walking into other people or things because they were so busy using their phones to text or chat. The survey used telephone interviews with 2,252 adults between April 29 and May 30. It has a margin of error of plus or minus 2.4 percentage points.
Posted by Sam at 8:03 AM