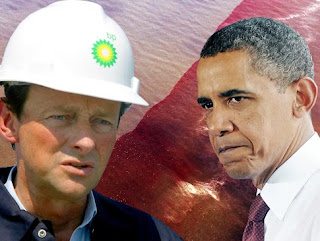 I am posting today's editorial from the Wall Street Journal because I believe it is of utmost importance to understand the ultimate ramifications inherent in what the Obama Administration and the President are doing.

Does an ecological disaster which causes a political panic justify setting aside the Rule of Law?

How can BP be forced to pay more than the $75 million cap on liability set by the Oil Pollution Act of 1990 without violating the rule of ex post facto constructs?

The bigger danger here is what then will NOT justify a willy-nilly setting aside of laws and precedent?

Truly, is it the rule of "Never let a crisis go to waste", in other words ruling by Presidential fiat.

"You, BP, go put money away now, in a trust we set up and manage, never mind paying dividends." says President Obama.

Now mind you I believe BP will be ultimately found to have used practices that ultimately will be shown to be the proximate cause of this disaster.  Apparently news came out this morning that the BP engineer on site chose to use only 1/3rd the recommended amount of centralizers to align the casing in the hole prior to cementing it in, in order to save money. (click here to see article)  This could have allowed the casing to not properly set in the hole and ultimately weaken the cement job.

We shall see.  However Presidential fiat shouldn't be the rule.

Obama's Political Oil Fund
In its Gulf spill panic, the White House runs roughshod over the rule of law.
The Wall Street Journal


The BP oil spill is already a calamity for the Gulf Coast ecosystem and economy, but now that Washington is looking to deflect all political blame it could also became a disaster for the rule of law. Exhibit C, or perhaps it's now D, is the new White House demand that BP pay into an escrow account controlled by government to pay for the economic costs of the spill.

Exhibit A was the public announcement by Attorney General Eric Holder that his Department had opened a criminal probe of the spill, a fact usually kept under wraps to protect the innocent.

Then came the President's suggestion that BP suspend its dividend, which is crucial to the retirement of thousands of shareholders. BP may decide it is prudent to suspend its dividend while it gets a better handle on its ultimate liability. But the White House has no legal basis to compel such a decision. Meanwhile, Democrats in Congress are preparing to lift their own $75 million liability cap and apply that retroactively to BP, another move of dubious legality.

No wonder Britain's Prime Minister and other officials are alarmed about the fate of one of their country's foremost corporations. This is the kind of treatment that Americans would protest if it were applied to U.S. companies by Venezuela or Russia.

None of this is to absolve BP for any bad judgments or shortcuts that contributed to this disaster, but there is not a chance of that happening. The more pertinent question is whether BP will survive, despite its ample cash flow, once the U.S. political and liability systems are done making the company pay. Neither punishment-by-bankruptcy nor extralegal looting will help Gulf victims.

Which brings us to the escrow demand that the President will presumably elaborate on in his Oval Office speech tonight. The idea is for BP to turn its assets over to a fund administered by an "independent" trustee who would decide what are legitimate damage claims from Gulf residents and businesses. Senate Democrats have graciously advised BP to start its payments to the fund at $20 billion.

The White House knows it has no legal authority to demand such a corporate ATM card, but it is counting on public anger to coerce BP to go along. The White House also knows BP is currently operating under the Oil Pollution Act, a piece of legislation passed in 1990 by a Democratic Congress.

A comprehensive response to the 1989 Exxon Valdez spill, the law was the product of 15 months of Congressional work and earned nearly unanimous bipartisan support. The bill made polluting oil companies responsible for all containment and clean-up costs. The law also established a claims process, which requires that companies compensate businesses or individuals harmed by oil spills.

BP has more than 600 claims personnel working to pay fishermen and others that have suffered economic damage. It has vowed to pay all "legitimate" claims and has worked through 20,000 of 42,000 submitted so far, at a cost of $53 million. BP has also promised it will not limit its payments to the Oil Pollution Act's $75 million cap on these damages, and last month it announced it would hire an independent mediator to review claims. Any claimant denied payment has the right to sue for redress under the law, which means BP has an incentive to get these payouts right.

The escrow administrator will be chosen by the White House, and as such would be influenced by the Administration's political goals. Those goals would include payments to those harmed by the Administration's own six-month deep water drilling ban. That reckless policy will soon put thousands of Gulf Coast residents out of work, but the White House knows that BP isn't liable under current law for those claims. The escrow account is an attempt to tap BP's funds by other means to pay the costs of Mr. Obama's own policy blunder.

Every $1 spent to pay for damages caused by the moratorium is also $1 less available for the oil-spill victims for which this money was intended. And that's before other interest groups popular with Democrats, such as the plaintiffs bar, plead their cases to the escrow fund's King Solomon.

Democrats are vowing this fund will be tightly crafted and used only for oil-spill payments. But only last week Democrats on Capitol Hill wanted to siphon money out of the Oil Spill Liability Trust Fund—established in 1986 and funded by oil taxes to help clean-up spills—to pay for their extension of unemployment benefits.

The history of such government funds is that they are always raided for politically favored purposes.
BP is financially responsible for the Deepwater Horizon gusher, and the White House should want the company to stay healthy enough to honor those obligations. Instead, the Administration's denunciations and legally dubious demands are compounding the damage.

Offshore drilling, even in shallow water, is coming to a stop as the entire industry considers the additional political risks of operating amid a political panic in which even the President of United States seems oblivious to the rule of law. We hope BP resists Mr. Obama's demands to put a political actor in control of its Gulf payments—both for the sake of legitimate Gulf claims, and to vindicate the U.S. as a nation that doesn't discard the law for the sake of political retribution.

We also hope other politicians, in the U.S. or U.K., begin to push back against a White House more concerned about its poll numbers than about the U.S. or Gulf Coast economies.
Posted by Sam at 6:44 AM