The Undead made me crash! 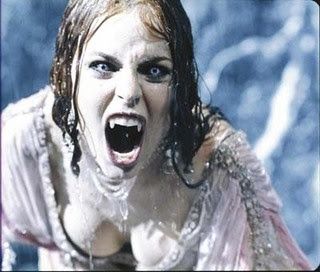 I don't believe her.  Maybe it was caused by Eclipse fever.

Because a real vampire would have fed on her.  She wouldn't be here to tell the tale.

Hmmm unless he/she/it had already fed.  Okay so maybe there is one.  Buy plenty of garlic and crucifixes folks.

FRUITA, Colo. - If a Western Slope woman is to be believed, vampires may be lurking in Colorado's Grand Valley.

The woman claims she spotted a vampire in the middle of a dirt road near Fruita, Colo. Sunday night. She told Colorado State Troopers she was startled by the undead being, threw her SUV into reverse, and crashed into a canal.

She was not injured.

State Troopers say the woman's husband arrived at the scene and took her home. The vampire, which was not seen by anyone else, apparently let her get away.

Troopers do not suspect drugs or alcohol to be factors in the crash.
Posted by Sam at 7:34 AM