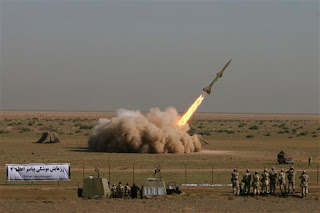 Gee, now I feel really secure about Iran and its seeking nuclear technology.

Is it a coincidence or just in time for their "peaceful" nuclear technology?

(Reuters) - Iran may be able to build a missile capable of striking the United States by 2015, according to an unclassified Defense Department report on Iran's military sent to Congress and released on Monday.

"With sufficient foreign assistance, Iran could probably develop and test an intercontinental ballistic missile (ICBM) capable of reaching the United States by 2015," said the April report, a copy of which was obtained by Reuters.

A classified version was also submitted to Congress.

The timing of advances in Iran's long-range missile technology is being closely watched in Washington, which accuses Tehran of pursuing nuclear weapons and is pushing for a new round of sanctions. Iran denies the charges and says its nuclear program is for peaceful purposes.

"Iran's nuclear program and its willingness to keep open the possibility of developing nuclear weapons is a central part of its deterrent strategy," the report said.