Is an exorcism needed to clean up the house? 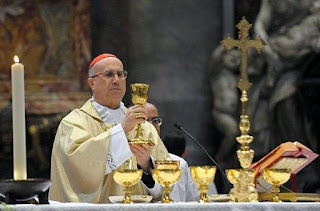 This handout picture released by The Vatican press office shows Cardinal Tarcisio Bertone leading a mass in 2009. The current Vatican number two, and not Pope Benedict XVI, bore the main responsibility for inaction in the scandal of a US priest accused of molesting deaf children, a German magazine said Monday.


Some very serious allegations about some serious serial molestations.

The House of God may need some cleaning out.

AFP - The current Vatican number two, and not Pope Benedict XVI, bore the main responsibility for inaction in the scandal of a US priest accused of molesting deaf children, a German magazine said Monday.

Vatican Secretary of State Cardinal Tarcisio Bertone -- who was the deputy chief of the Church's moral watchdog when it was headed by the current pope -- played the role of a "brake" in the affair, the Die Zeit weekly said.

Benedict has faced criticism over claims that, as Cardinal Joseph Ratzinger, he failed to take action despite being alerted twice by the archbishop of Wisconsin to claims that Reverend Lawrence Murphy had abused 200 children.

But Die Zeit, citing a copy of Vatican documents, said that at a crisis meeting arranged by the Vatican in 1998, it was Bertone who raised numerous obstacles against internal disciplinary proceedings against the US priest.

It said Bertone warned it would be difficult to deal with Lawrence's case when it would have to be "treated in absolute secrecy", while there would also be trouble gathering evidence "without enlarging the scandal".
He also wanted to "avoid a scandal for his boss", the weekly said, citing a summary of the meeting.

Documents provided by victims' lawyers and cited by the New York Times last month allegedly showed that Ratzinger did not respond to two letters on the issue from the archbishop of Wisconsin.

The Times also said a secret canonical trial authorised by Bertone was halted after Murphy wrote a pleading letter to the future pope.

The abuse claims dated from when Murphy worked at a school for the deaf from 1950 to 1974.

Murphy died in 1998 aged 72, four months after the Congregation for the Doctrine of the Faith, the body chaired by Ratzinger, suggested restricting Murphy's public functions and requiring him to accept responsibility for his acts.
Posted by Sam at 7:23 AM