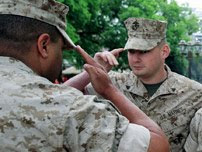 Some have it in spades.

After all he's been through, the only real regret Marine Cpl. Matthew Bradford says he has now is not being able to return to combat duty in Iraq.

But Wednesday, Bradford, 23, made Marine Corps history, becoming the first blind double amputee to re-enlist. In keeping with service tradition, Bradford was honorably discharged and allowed to say a few words as a civilian before re-enlisting.

“Sign me up, sir!” he told Lt. Col. David Barnes, who administered the oath of enlistment, extending Bradford's military career by another four years.