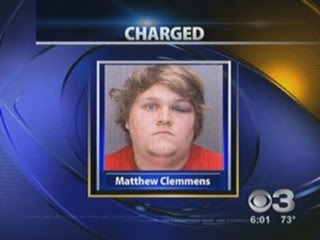 How disgusting is this?

The guy who did it should be glad the girl's father kept his cool.  It was probably because Dad's a Captain with the Easton Pa. Police Department.

I probably would not have been so calm.

But wait!!  Is that a swollen and black eye the suspect is sporting?  It is!!

PHILADELPHIA (CBS 3) ― Police arrested a Cherry Hill man after he was accused of intentionally vomiting on a young girl at the Phillies game Wednesday evening.

The young girl's father, trying to give his daughters an unforgettable night at the ballpark, ended up getting a memory he wishes he could forget.

Captain Michael Vangelo with the Easton Police Department was off-duty when he took his 11 and 15-year-old daughters to the Phillies game Wednesday night.

"When I say disgusting, there was not only insults and vulgarities directed at us, but also beer was thrown at us," Vangelo told CBS 3.

Unfortunately, the evening only got worse.

"I actually heard the individual behind me say, 'I'm gonna get sick', then I couldn't believe what I saw. He actually had his fingers down his mouth and into his throat to make himself vomit. He vomited and lurched forward and it was hitting my daughter," Vangelo explained.

According to Vangelo, Clemmens and friends were sitting behind them and appeared to be drunk. One of them was even thrown out of the game earlier for unruly behavior. The vomiting upset and scared Vangelo's 11-year-old daughter.

"She was crying and that's difficult to see as a dad," Vangelo said.

So Vangelo stepped in and with help from fellow fans, held Clemmens down until police arrived. The Vangelos thought the night had been completely ruined.

"But a great fan caught a ball and he gave it to my daughter. She slept with the ball last night and when I woke her up this morning for school, the ball was still in her hand," Vangelo explained.

As of Thursday, Clemmens remained behind bars waiting to be arraigned on charges of simple assault, aggravated assault, reckless endangerment, harassment, disorderly conduct and resisting arrest.
Posted by Sam at 7:46 AM