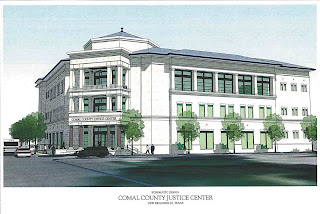 The time to choose is now.

The time for the new Justice Center is now.

Justice Center: Yes or No?
By Chris Cobb - The Herald-Zeitung
After months of debate, voters now will have a chance to decide the fate of the Comal County Justice Center.

Early voting begins Monday in the bond election to determine whether Comal County Commissioners will be allowed to issue $36 million in debt to build the controversial downtown facility.

The proposed four-story, 127,000-square-foot justice center would take up a city block along Seguin Avenue in between Bridge and Zink streets, across the street from the county tax office.

It would house several county departments, as well as prisoner holding areas and six secure courtrooms. A citizen-led petition drive in November has brought the issue to a vote, forcing a bond election after halting an attempt by commissioners to pay for the facility without voter approval.

The case for voting ‘yes’

Proponents of the justice center have said that its construction is vital, and would accommodate future growth, remedy lax courtroom security and help maintain a vibrant downtown.

County commissioners have been planning for the facility’s construction for more than five years. After studying potential sites throughout the county, commissioners opted for the proposed location in central New Braunfels, purchasing the property for $1.5 million in April 2008.

Supporters say having a functional justice center in the heart of the city — with its accompanied law offices, coffee shops and constant foot traffic — is critical to the health of the downtown economy.

“Downtown New Braunfels is the traditional seat of county government,” said former County Court-at-Law Judge Brenda Chapman. “If you move it to some other location, I think you’re going to cause irreparable harm to downtown.

The community has spent a lot of money to keep downtown vibrant. If you pick up and move county government, all of those professionals and those businesses are going to move with it.”

Chapman has been an active supporter in Citizens for a Secure Future, a political action committee set up to lobby support for the justice center’s construction.

The new justice center would house not only six courtrooms, but also court and county clerks and the district attorney’s office.

Opponents of the justice center have suggested spreading those departments out, and possibly trying criminal and civil cases in separate locations.

“The opponents of the justice center don’t even have a rudimentary understanding of how our criminal and civil justice systems work,” Chapman said. “Civil proceedings can be just as dangerous as criminal trials, and you still need to provide security.

And on top of that, moving those departments somewhere else would actually cost more money.”

Security has been one of the justice center’s central issues, with judges in the county lobbying for the past six months for a new justice center to protect the public.

Currently, there are few secure holding facilities at the courthouse annex, particularly for women or juvenile offenders — who are then forced to sit in jury boxes.

Metal detectors are only used for high-profile, potentially dangerous cases, and with the more than 20 entrances into the annex, county officials have said it would be near impossible to screen every person who enters the building.

Defendants out on bond could have unfettered access to judges, juries and the general public.

“We have people that are dangerous roaming the hallways,” Chapman said. “Tensions run high and right now we have no way of screening everyone. Something needs to be done.”

County officials have estimated that the tax impact of the justice center would equate to $.015 for every $100 in property value. That would cost $30 per year in taxes for someone with a $200,000 home.

Chapman said it should be built now, while interest rates and construction prices are relatively low.

The proposal has been supported by nearly every county department head and judge that works in the current annex building.

And those supporters say a vote for the justice center would be a vote for downtown’s future.

“The people against this really are misinformed, and they’re doing a disservice to voters by feeding them misinformation,” Chapman said. “This really is something that will be a good thing, not only for the city of New Braunfels, but all of Comal County in the long run.”

The case for voting ‘no’

Opponents of the justice center have said it’s too expensive, doesn’t adequately plan for the future and shouldn’t be built downtown.

The most vocal of those opponents has been former New Braunfels City Councilor Ken Valentine, who said there are better ways to plan for the county’s future.

“There are just other options that need to be looked at,” he said. “This can be done better, cheaper and in somewhere where there is room to expand in the future.”

Valentine is the founder of Comal County Justice Center Plan B, a political action committee set to promote alternatives to the current justice center plans.

“The downtown location is really land-locked,” Valentine said. “While this may satisfy the needs of the county for the next 15 to 20 years, where is the room to grow?”

County officials have said the proposed justice center would last for at least 20 years, and could be added onto if necessary in the future.

Valentine said it would be better modeled after the new Hays County Government Center. Crews will break ground on the $58 million, 232,000 square-foot this month — well outside of downtown San Marcos.

“I think that would really be the smart thing for us to do also; build it somewhere where we can expand,” he said.

Although not a part of the bond election, accompanied with the justice center is a proposed parking garage to be built on Seguin Avenue across the street from the courthouse annex where the tax office is now. It would be funded jointly by the county and the city of New Braunfels. County commissioners already have dedicated $2 million to its construction.

Like the justice center, Valentine said, a parking garage is not necessary downtown.

“There is no parking problem downtown,” he said. “It’s kind of like all the security stuff. I think when people are talking about needs, they’re really talking about wants. Does everybody want new digs? Of course they do, but taxpayers would be paying for it.”

For address security, Valentine said he would like to split criminal and civil proceedings, with criminal cases moved to a new facility added onto the existing Comal County Jail.

“Let’s keep the criminals out of downtown,” he said.

He said he would like to set up a committee to evaluate the best possible solutions for expanding both the jail and the courts in Comal County. And not rush to build a building he thinks isn’t prudent or necessary right now.

“This isn’t New Braunfels County,” he said. “This is Comal County and we need to be thinking about what makes the most sense for everyone in the county.”
Posted by Sam at 2:19 AM