The law prevails over Oprah! 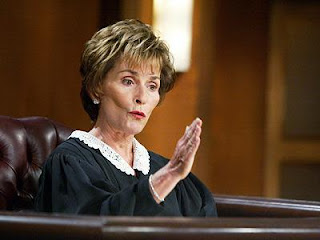 
In the back and forth battle between Oprah and Judge Judy for daytime supremacy,  Judge Judy won for the second week in a row.  Prior to Ms. Winfrey’s recent winning streak of three weeks, Judge Judy had a 10 week run of winning.


Two and a Half Men again trailed only the perennial syndicated frontrunners Wheel of Fortune and Jeopardy.
Legend of the Seeker Fans:  This week Seeker got its own post.

WWE Friday Night Smackdown! Fans:  Smackdown! didn’t make the top 25 (it was #28 by viewers), but the telecast on February 26 averaged 3.443 million viewers and a 2.0 household rating.


Please note that the syndicated weekly results are delayed versus normal reporting.  While we get the broadcast and cable ratings for the prior Monday-Sunday period every Tuesday, there is an extra week of lag time with the syndicated ratings and these numbers are not for last week, but for the week before last (in other words, the WWE Friday Night Smackdown! is for February 26,  not March 5).