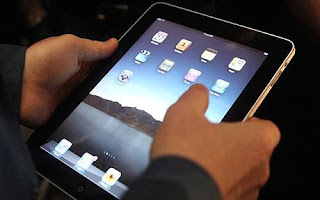 Some one allowed me to try their iPad the other day.  It does have a high "cool" factor.

I don't feel a burning desire or need to get one however.


Security experts have warned that Apple iPad users are being targeted by cyber criminals. Hackers are trying to dupe iPad owners in to downloading a fake iTunes update on their Windows computer, which, when installed, creates a backdoor for cyber criminals, allowing them to remotely access the machine or even use the computer to send spam messages.

A dialog box pops up telling the user that a recent iTunes update has been released for the iPad. Users who click on a link are taken to a site that looks exactly like the iTunes download web page, but the file the user downloads is actually a Trojan that installs malicious code on the machine. The Backdoor. Bifrose. AADY virus tries to steal passwords and login details for email accounts and instant-messaging services.


"The trick is pretty simple," said Catalin Cosoi, a senior researcher for BitDefender, which uncovered the scam. "They're clever to do it this way. If they were able to target Mac customers, it would have spread like wildfire, but because most antivirus companies detect this Trojan, it's aimed at Windows users who have bought an iPad and who also don't run a security product."

BitDefender has advised iPad owners not to click on any links that appear in dialog boxes or alerts, and to download iTunes directly from the Apple website. The company also emphasised that the iPad itself remained unaffected by the Trojan.
Posted by Sam at 7:53 AM